Wow, there are so many gemstones out there! We all know the most common precious stones: Emerald, Ruby, Sapphire etc. but do you know any of these less well known semi-precious gems? Our pictorial guide will give you head start on gems beginning with A!

A Selection of Colourful Mineral Gemstones

Almandine, Amazonite, Amber, Amblygonite, Amethyst, Ammolite, Andalusite, Andesine-Labradorite, Apatite, Apophyllite, Aquamarine, Aventurine, Axinite, and Azurite. Abalone OK, starting with a bit of a cheat - this one isn't a gem! Abalone is a kind of sea snail and the lining of its shell – mother-of-pearl – is prized for jewellery decoration. You'll usually find it forming a layer or inlay for a coloured background as it's not suitable to be cut like a gem.

Inside an Abalone Shell Showing Mother-of-Pearl

Achroite is a colourless variety of Tourmaline (we'll get to gems starting with T later!), also known as white tourmaline. In its purest form it's ideal for cutting into gems for jewellery.

Actinolite, also known as Actinolite Cat's Eye, is a rare pale yellowish green gemstone that looks best when cut cabochon (see our glossary for Cabochon definition). Cutting the gem with facets ruins it's milky opaqueness and the 'cat's eye' effect of its light refraction. The best deposits are in Canada but it's also found in Western Australia, Brazil and Madagascar.

Actinolite Raw and as a Polished Cabochon

Adamite Adamite is a very rare mineral gemstone that's generally considered too soft for jewellery. It was first documented in 1866 by Frenchman Gilbert-Joseph Adam who discovered the mineral in Chili, This beautiful gem fluoresces a bright green under ultraviolet light, but is a yellow to yellow-green in natural light, and occasionally found in blue or violet colours. It's probably a good thing that Adamite is not really suitable for jewellery (though some gems have been set in jewellery before) because this mineral contains arsenic!

Afghanite Relatively newly identified, Afghanite was first documented in 1968 having been discovered in northern Afghanistan, Afganite has a stunning bright blue colour that fluoresces brightly under ultraviolet light. Not all afghanite mined is clear and pure enough to be cut into gemstones so this remains a highly prized and collectible gem.

Agate Agates are semi-precious gemstones naturally occurring in many colours, including blue, brown, yellow, black, green, white, and grey. They're formed in pockets left in (largely volcanic) rocks where tiny quartz crystals fill the gaps layer by layer. Layers may form in different colours, influenced by environmental pressures, meaning that every single agate is unique. In jewellery agates are generally cut en cabochon (refer to glossary for definition) to enhance their colour.

Ajoite Pronounced ah-hoe-ite, this gem was last found in Messina in 1991, but the mine flooded and has remained closed ever since. If you're lucky enough to own a peace of this mystical turquoise coloured mineral it's said that you will enjoy peace and harmony as it was highly prized by Papago Indians in Arizona - the only other place in the world it has been known to occur. As all known mines are closed or exhausted this is likely to remain a rare mineral for a very long time!

Akoya Pearl Akoya pearls are naturally produced when an irritant enters the shell of a saltwater oyster. The oyster builds a protective layer of nacre around the irritant, and it's this nacre that gives the pearl its lustrous glow. Once very expensive due to their near perfect roundness and the hit-and-miss process of oyster fishing, Akoya pearls are now cultured in special oyster farms where an irritant is artificially inserted into the mollusc.

Akoya Pearls with a Pinkish Hue

Think diamonds are the most valuable gem in the world? Think again! Alexandrite, discovered in Russia in 1834, is so rare that it is possible the most expensive gem you could hope to buy. And with it's amazing colour changing ability, going from emerald green in daylight through to yellow and ruby red in candlelight, this chameleon gem is a most desirable gem indeed.

The Colour Change Seen When Alexandrite is Photographed in Different Lights (Picture Attribution: By User: at en.wikipedia [GFDL (http://www.gnu.org/copyleft/fdl.html) or CC-BY-SA-3.0 (http://creativecommons.org/licenses/by-sa/3.0/)], from Wikimedia Commons)

Albite Albite is a very common white crystalline mineral with a bluish tinge, often polished into gems called moonstones. It's found all over the world.

Almandine / Almandite Almandine, often incorrectly called almandite, is a fairly common form of garnet. Most garnets are a mixture of different garnet forms and those containing almandine are a darker, brownish red. Also known as the Ceylon Ruby.

Amazonite is a soft gem with a name that's something of a misnomer. It was named after the Amazon River, though it's unlikely that this is the original source of the gem with occurrences mainly in Europe and the United States, but it is similar to other stones found along the Amazon so the name is most likely a result of mistaken identity. Amazonite is a light greeny-blue colour (which is why it's also known as Amazon Jade) with a soft sheen to its surface. In jewellery use Amazonite is generally cut en Cabochon because its lack of durability means that facets tend to dull.

Amber Amber isn't strictly a gemstone as it's the fossilised resin of tree sap formed over thousands of years. The conifers of northern Europe secreted a sap that was very sticky and renowned for trapping small animals and insects, as well as seeds and petals. The sap would form an air-tight seal around whatever it caught, perfectly preserving it as it hardened and formed into the amber we all love today. Amber is a beautiful rich golden colour, prized as much today for its extinct plant and animal inclusions that give an insight into an ancient world we can only imagine, as it was for its mysterious healing powers in prehistoric times.

Amblygonite Amblygonite is a transparent mineral that is very common, although specimens of a quality good enough to be cut into gemstones are actually quite rare. Amblygonite is generally a very pale straw yellow to white colour and is quite soft, so it's unsuitable for hard-wear jewellery items like rings.

Amethyst Amethyst, the birthstone for February, is a precious gemstone prized for its violet-purple colour. The colour comes from its iron and aluminium content, without which it would simply be an ordinary colourless quartz. Because of its translucency it is most often cut with facets to show off its depth of colour and light refraction. 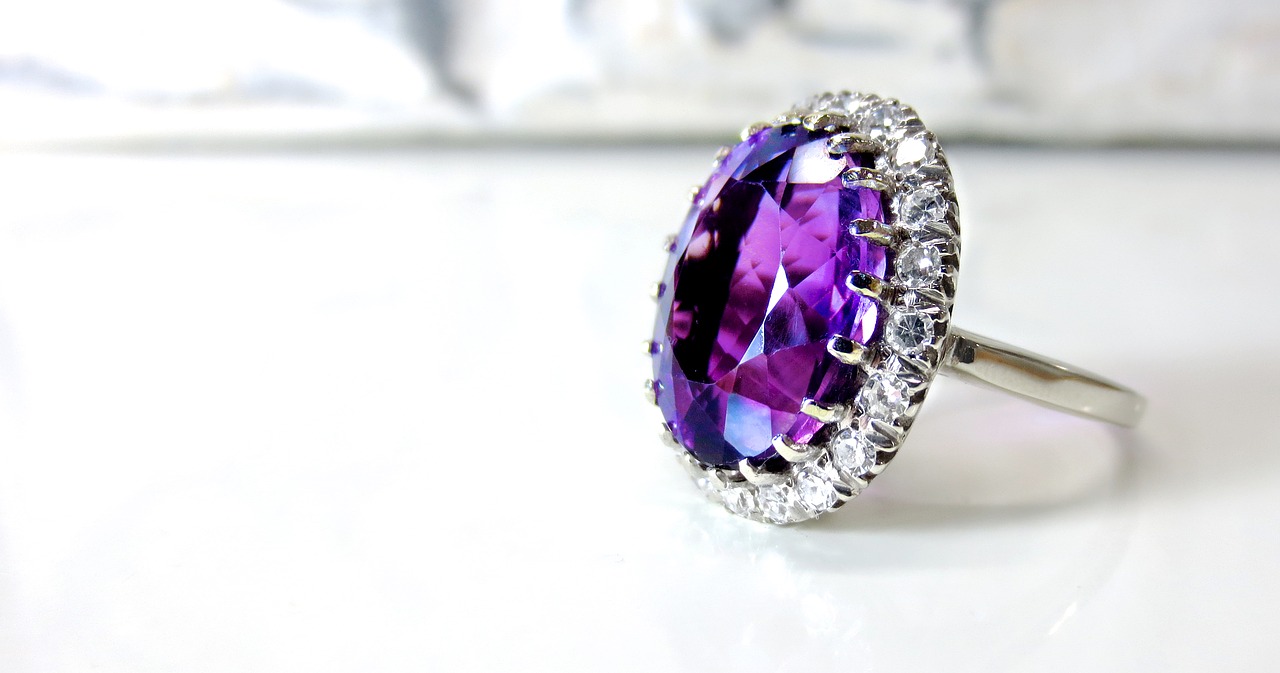 Raw Amethyst Geode and Cut Gemstone Set Into A Ring

Ammolite / Ammonite Ammolite, like amber, is another semi-precious material that is not strictly a gemstone. Like mother-of-pearl it is cut from the shells of fossilised ammonites, creatures that swam the seas millions of years ago. Ammolite is a highly iridescent, very colourful product (all the colours of the rainbow!) that is only found in one small area of Canada, making it quite rare. It is thought that all known sources of ammolite will be exhausted within the next twenty years. 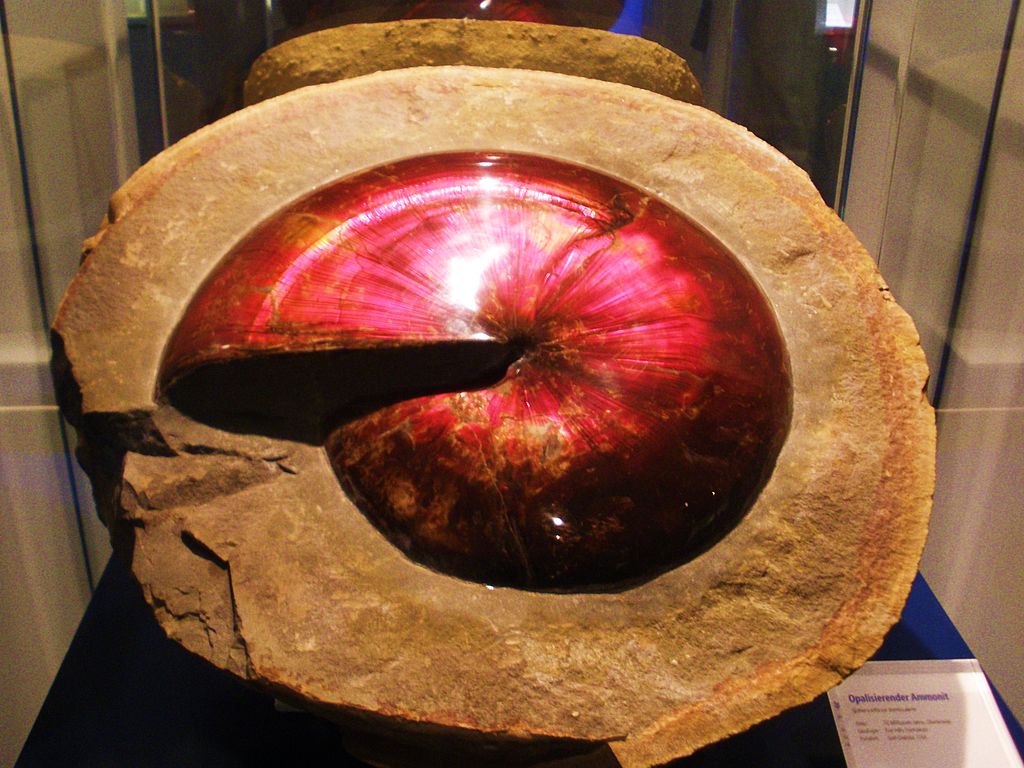 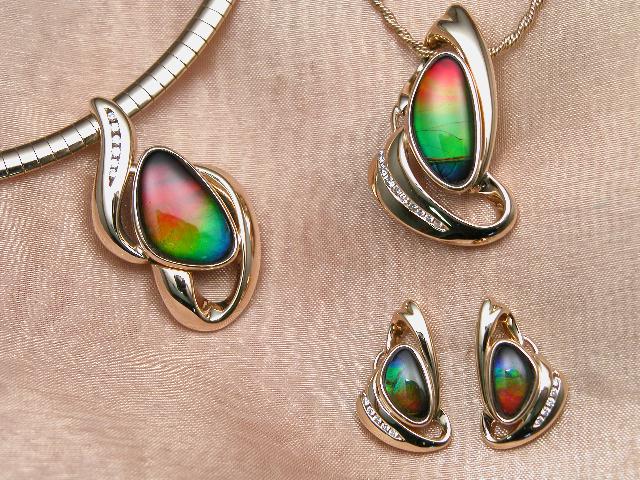 Andalusite Andalusite is a not-well known gemstone though it is gaining popularity in the jewellery industry owing to its hardness, which makes it suitable for a number of jewellery applications. The crystals are typically small so best suited to clusters or accents, and are generally found in shades of yellow through to brown. When light strikes the gem from different angles, andalusite can throw several distinct and different colours.

Andesine-Labradorite This is quite a new gem, having only been brought to the market in 2003. It's generally found in red, orange and pink tones, though other colour-ways have been reported, and even andesine gems that mimic alexandrite with a red-green colour change. There's some controversy surrounding the origins of the andesine gemstone with some gemologists believing it to be an artificially coloured form of labradorite while others believe it is the same form of andesine gem as originally found in the Andes in the 1840s. To avoid any controversy and cover all bases, the gem is now commonly referred to as andesine-labradorite.

(Picture Attribution: Image sourced from www.wardgemstones.com. We claim no rights of ownership or to publication).

Apatite Apatite as a mineral is very common, but apatite of a gemstone quality is rare. It's not commonly seen in jewellery but because of its vast range of colours it's a favourite amongst gemstones collectors. Apatite also fluoresces brightly under fluorescent light. 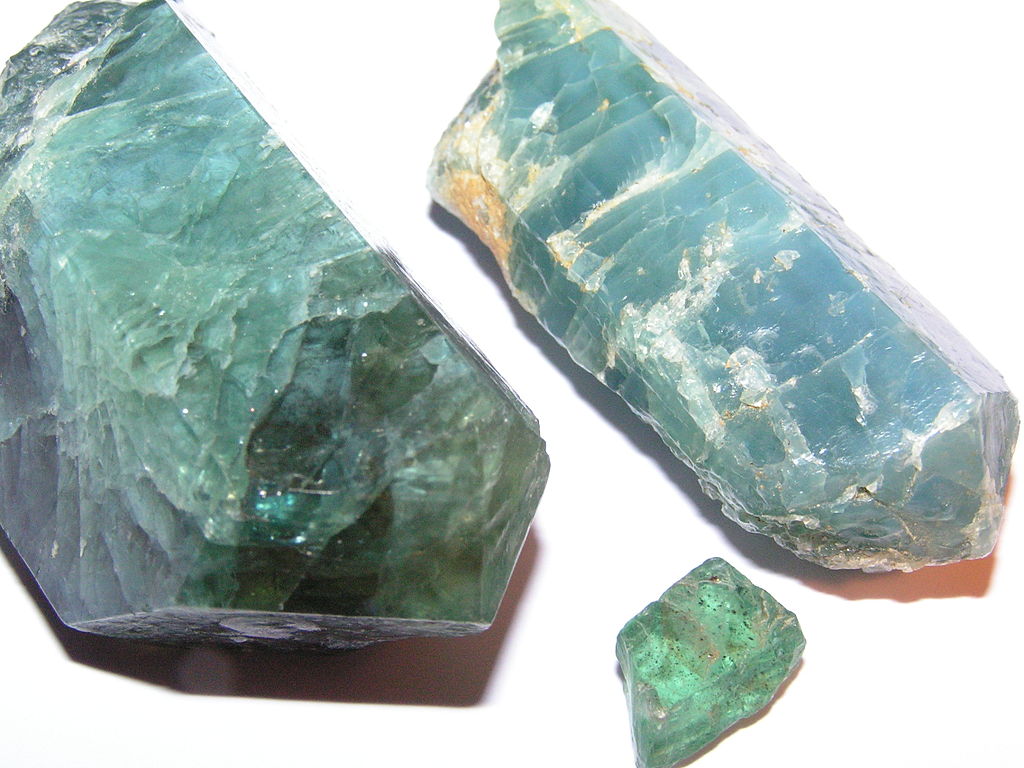 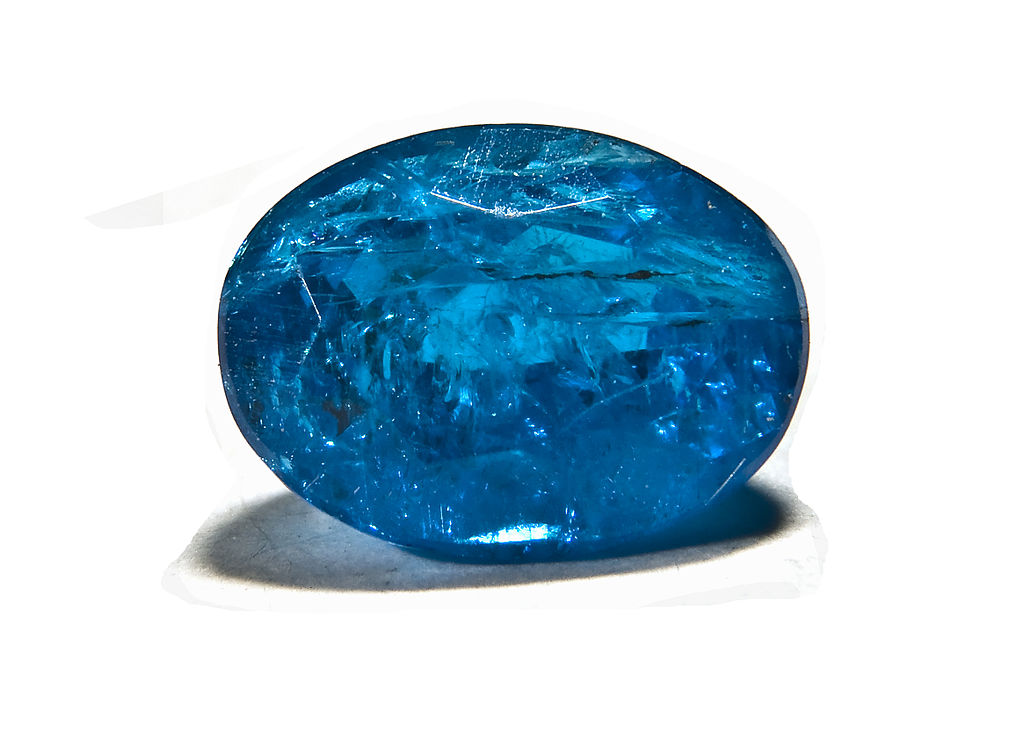 Apophyllite Apophyllite is very common and found all over the world where there has been volcanic activity. It can occur in quite large crystals and is generally white or colourless, though it has been found in greys, greens and browns before. Because it is quite fragile and 'flaky' it is not really considered suitable for jewellery manufacture, but some pieces have been made.

Aquamarine, the birthstone of March, has a beautiful soft seawater colour and is found in Africa, India and Brazil. Stones can be quite large - the largest ever found weighed 110 kilograms! The large crystals mean it can be cut into large carat gemstones, perfect for statement pieces!

Aventurine Aventurine is the 'lucky stone' said to enhance the health and wealth of whoever carries or wears it. It has a high quartz content that makes it shimmer as if filled with glitter, and is found in opaque shades of pale green. It's a popular gem for jewellery as it is quite durable, cut en cabochon.

Axinite Axinite is a purply brown gemstone, quite hard but a little brittle for jewellery, When cut with facets and rotated in the light axinite throws various subtle shades from cinnamon to dark brown, making it desirable for gemstone collectors.

Azurite A deep blue uncommon gemstone whose blue colour comes from its iron content. It's a brittle gem that isn't really durable enough for jewellery, though its colour makes it highly desirable and it is often used.

That's 24 gems we've identified beginning with A, but if you think we've missed any let us know and if they're gem-worthy we'll add them!

Next week: "Which Necklace Length Suits You?" A Guide to different necklace lengths and the best choice for your outfits.

Do Clip On Earrings Hurt?

How to wear your clip-on earrings

How to Adjust Your Clip-On Earrings

Know Your Style: A Buyer's Guide to Earrings.

The Major Gemstones | The Cardinal Gemstones

What is Boho Styling?

Birthstones for the Days of the Week