"It's Hallowe'en night when the vampires bite,

if you don't give us a treat we'll give you a fright!"

Well, not really - we're a very friendly bunch here, but being Hallowe'en and all that we thought it the perfect time to cast a few jewellery spells and immerse ourselves in the spooky world of jewellery superstitions, curses, and old wives' tales!

Let's start by casting a jewellery spell - no cauldron needed!

"Never ending, never bending, round the circle, round the ring" Put the ring on your finger and repeat the spell:

"Never ending, never bending, round the circle, round the ring" You've filled the ring with magic and now it's time to put it to work! Place the ring on a table, fill it with peppercorns, and recite the following incantation: "Never ending, never bending, circle round (their name) bound" Hey presto, your ring is now a ring of protection! Wear it for at least the next few days, and whenever you feel the magic waning just repeat the incantation to give it a boost.

The curious case of the cursed jewellery!

There are many tales of cursed jewellery, and many famous gems with a curséd tale to tell... The Hope Diamond is known for bringing about the untimely death of its wearers, and the Koh-i-Noor Diamond, which once graced the Peacock Throne of the Indian Mughal emperors before being gifted to Queen Victoria, is famed for bringing about the demise of male monarchs whilst female monarchs remain unaffected by its curse;

"He who owns this diamond will own the world, but will also know all its misfortunes. Only God or woman can wear it with impunity"

With Queen Victoria and Queen Elizabeth II being the two longest serving monarchs in British history it seems there could be some truth in that!

But our favourite cursed piece (can we have a favourite?) is the

"triple damned and stained with the blood of all who have possessed it" Removed from India following the uprising in 1857, the first to feel the curse of the Delhi Purple Sapphire was Colonel W Ferris who claimed the gem ruined both his health and wealth and left him a wretch. His son, who inherited the gem after his death, suffered the same downturn in luck, and a family friend who borrowed the jewel felt compelled to commit suicide. In 1890 the gem came into the possession of Edward Heron-Allen, the last known owner and the one responsible for imprisoning it within the many boxes. Edward immediately began to feel the effects of the curse and passed the gem to a friend, begging him to get rid of it. But the friend returned the gem to Edward after being 'overwhelmed by every conceivable disaster". Trying again to rid himself of the curse, the gem was given to a singer who returned it to Edward after permanently losing her voice. Desperate to be rid of the gem Heron-Allen threw it into a canal, only for it to be returned to him three months later after being found by a dredger. By 1904, worried that the curse would harm his newborn daughter, Heron-Allen locked the gem away securely within its seven boxes and deposited it in his bank. Upon his death in 1943 his daughter fulfilled his last wish by donating the gem, with Edward's note recommending it be "cast into the sea", to the Museum of Natural History where it remained in storage until its rediscovery in 1970. Neither his daughter nor grandchildren ever touched the stone for fear of its curse. Perhaps the Delhi Purple Sapphire is merely expressing its displeasure at being called a sapphire when it is, in fact, an amethyst! 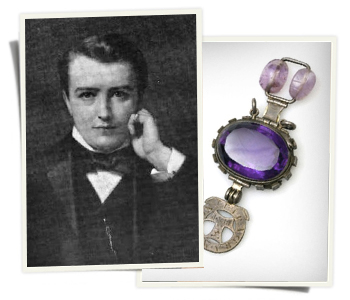 "Pay Heed to the tales of old wives"

Old Wives and Witches have long been considered one and the same, so is it any wonder so many people find truth - and superstition - in their tales?

Old wives' tales around jewellery abound, like "cure an eye stye by rubbing a gold wedding band on it" and "placing a pearl under your pillow will help you conceive" but there is none more popular and still in use today than the baby gender test! Whether you have already completed your family, or have yet to start, this wedding ring gender reveal test is noted for its high level of accuracy...

If you are currently pregnant (or know someone who is) this simple test will reveal the gender of the unborn child. First, have the mum-to-be lie down comfortably and remove her wedding band, or other ring of her own. Pluck a strand of her hair and tie the ring to it - don't worry if the mum-to-be has short hair, cotton or thread will do just as well. Now here's the fun part!

predicting the children you will have

There is also an old wives' tale that predicts how many children you will have and in what order, and this is said to work even if you have already started or completed your family.

The curious mother must take a pendant necklace or suspend a ring from a chain and dangle it by the clasp over the palm of her hand. Tap the pendant into the palm of the hand three times and then wait to see which way it moves. It will either sway back and forth or swing in a circle to predict a boy or girl as above. After a few seconds it will stop, then begin to move again to predict the second child and so on until your family is complete whereupon it will stop and dangle steadily. This method is deemed so accurate that it even predicts the children lost to miscarriage!

Do you know any old wives' tales, spells cast with jewellery, or jewellery superstitions? Or do you have any cursed jewellery of your own? We'd love to hear about it for our future articles! Next week: "TRENDING: Monochrome!" The classical elegance of black and white styling is something that never goes out of fashion.

Do Clip On Earrings Hurt?

How to wear your clip-on earrings

How to Adjust Your Clip-On Earrings

Know Your Style: A Buyer's Guide to Earrings.

The Major Gemstones | The Cardinal Gemstones

What is Boho Styling?

Birthstones for the Days of the Week